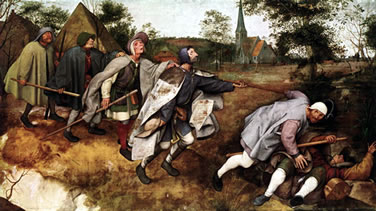 39 And He spoke a parable to them: “Can the blind lead the blind? Will they not both fall into the ditch?

Even though this blog is not specifically Christian it is specifically spiritual and supernatural.  And, since The Bible is a supernatural guide book and Yeshua/Jesus is the most supernatural man of all time (who else do you know that was raised from the dead) the commentary in these blogs comes from that paradigm.

This past weekend Super Bowl 46 was played and the halftime show by Madonna has caused the bloggers, commentators and forums to light up because of all of the overt occult and Illuminati imagery.  We did one here two days ago called Super Bowl Halftime Poke in the EYE thoroughly examining the imagery presented in the almost 13-minute performance.  Since then I’ve seen numerous writers regurgitating the same information over and over acting as if they are the only ones who saw it.

As someone who came out of the occult and has been on the front lines against the kingdom of darkness for over 23-years I have been mulling over the deliberate overt message presented to us during the show.  Here is my dilemma – was that a deliberate in your face subliminal imprint of an Illuminati message OR was it a misdirection from the powers of darkness.

I know that many of the 100-million plus viewers (possibly 100s of million worldwide) were oblivious to the imagery.  With the rise of the Internet and digital media analysis of the show went viral pretty quickly.  And, for three days now all anyone is talking about is “did you see Madonna’s satanic ritual on television Sunday?”  I understand spiritual warfare and even natural warfare and when an enemy is that overt we have two consideration to pay attention to.  A: The enemy has no fear of being stopped or belief that we can do anything to stop them.  Or, B: It was intended to distract us from other more important issues happening right under our noses.   Whenever, the enemy telegraphs a punch I am always looking for the sucker punch that is their real intention.

There is an old saying by George Santayana (from Life of Reason, Reason in Common Sense, Scribner’s, 1905, page 284″) – ‘Those who cannot remember the past are condemned to repeat it.’

We must remember that the evil that lurks in the darkness is a liar and manipulator.  The same silky serpent’s tongue used in the Garden of Eden is being used today.  That has not changed.  So, when the powers of darkness do something that is obvious and overt we must keep our eyes open to a possible misdirection and subterfuge occurring.  Either way, we see what needs to be seen and are not caught off guard.  blindly following other people’s views or perspective are just as dangerous as being completely ignorant of what is going on.  Without our own discerning of spirits, revelation knowledge and prayer we can get caught off guard.  When we get caught off guard we fall for the deception and fall into that ditch mentioned in Luke 6:39.

I do not have any answers as yet but I am praying and seeking wisdom on this.  Something about all of this just doesn’t feel right to me.  All we can do is watch and pray and be ready to act.  To do that we must we have eyes to see.

So, that the darkness doesn’t fool you we are leaving the LIGHT on!

Sharing information and inspiration from all areas. Natural to Supernatural. Media to Ministry. And, all areas in between.
View all posts by The Beacon's Glare →
This entry was posted in Christian, End Times, Prophecy, Superantural, Uncategorized and tagged Blind leading the blind, deception, eyes, misdirection, The Bible. Bookmark the permalink.