First it was Madonna’s 12:40 second Occult/Illuminati ritual during the Superbowl Half Time Show and then a week later we see another ritual performed on Network Television. (see our analysis of the Superbowl show in our blog Super Bowl Halftime Poke in the EYE. 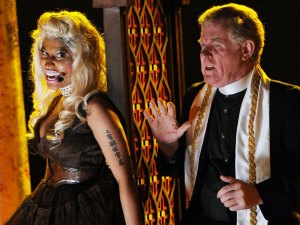 This past Sunday night during the 54th Annual Grammy Awards singer (and I use that word very loosely) Niki Minaj (a variation of menage-a-trois) performed her song Roman Holiday.  According to Niki while discussing her performance with Ryan Seacrest – “I had this vision for Roman [Zolanski], I had this vision for him to be sort of exorcised — or actually he never gets exorcised — but people around him tell him that he’s not good enough because he’s not normal, and he’s not blending in with the average Joe. And so his mother is scared and the people around him are afraid because they’ve never seen anything like him.  He [Roman] wanted to show that not only is he amazing and he’s sure of himself and confident, but he’s never gonna change, he’s never gonna be exorcised. Even when they throw the holy water on him, he still rises above. That’s what was portrayed,”

So, I assume that the lyrics of this song convey Niki’s simplistic message about her character Roman.  Let’s see –

We traded vows on the front line.

The most informative part of her interview with Ryan Seacrest is this one part – “Roman Holiday” was so memorable, it also hooked Grammy producers from the first listen.   “The Grammys chose ‘Roman Holiday.’ The producers of the Grammys came to the studio and I played them ‘Roman Holiday,’ and I could not play them another record after they heard that,” Minaj revealed. “They went crazy. I could have chosen to do a no-brainer pop song, but I can’t do it anymore. I have to stay true to what I’m doing.”

She didn’t slip this performance past anyone.  The producers of the Grammys wanted this song and the performance that went with it.  Just like the producers of the Superbowl Halftime Show (NBC & the NFL) were not concerned about the imagery portrayed there either.  Within a week of one another we had two “spirited” musical performances stirring the religious pot.  And, as a side note, the offensive, over-the-top Grammy spectacle was inspired by her Super Bowl performance with Madonna.

The question we have to ask is this – are simply seeing a stretch of the creative boundaries in music on television to match the flavor of the supernatural themed television of late?  Or, are the boundaries being pushed for the purpose of a more nefarious ritualistic agenda by the fallen ones?  I believe it’s the latter of the two and if we don’t push back we will be inundated with more of the same.  The timing and the venues for the two aforementioned ritualistic performances  have been before massive worldwide television audiences, with the Grammys Show 2012 having its second largest audience ever at 40-million viewers (a 28-year high).

Sharing information and inspiration from all areas. Natural to Supernatural. Media to Ministry. And, all areas in between.
View all posts by The Beacon's Glare →
This entry was posted in Christian, End Times, Entertainment, Media, Music, Superantural, Uncategorized and tagged exorcism, fallen angels, Grammys Show 2012, Network Television, Niki Minaj, Roman Holiday. Bookmark the permalink.