When I made the commitment to write a daily blog I thought I would get up each morning and offer a thought, insight or share some links.  And, for the most part I’ve been able to honor that.  Every now and then it takes a little longer to allow inspiration to percolate inside of me to create what I feel led to share.  This was one of those days. 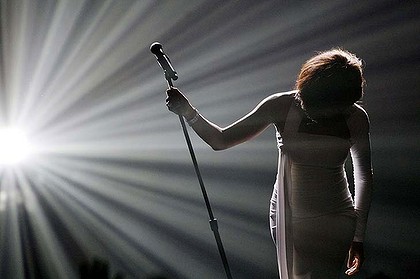 Unless you’ve been without any form of communication of any sort you know by know that the singer and actress Whitney Houston died Saturday February 11th.  In 2009 Guinness Worlds Record declared her the most awarded female artist of all time.  She was the only artist to have seven consecutive Number 1 Billboard Hot 100 hits.   The lead single from the 1992 movie The Bodyguard “I Will Always Love You” became the best-selling single by a female artist in music history.  She was considered to have a voice “touched by God”.  At 3:55 pm on Saturday February 11, 2012 in the bathroom of her suite in the Beverly Hilton Hotel none of that mattered.  At that time she was declared dead and for the next 6-hours, while her peers and friends partied in the hotel ballroom below, her body would be kept (by request) in the suite until the police did a thorough investigation.  No, at that moment she was another fallen idol of our American entertainment system.

The term demigod (or demi-god), meaning “half-god”, is commonly used to describe mythological figures whose one parent was a god (usually Zeus) and whose other parent was human; as such, demigods are human-god hybrids. In some mythologies it also describes humans who became gods, or simply extremely powerful figures whose powers approach those of the gods even though they are not gods themselves.

There is something innate in our human nature to want to keep recreating the mythology of the demigods either through arts and entertainment or through athletics.  We elevate individuals who achieve a technical proficiency (natural or acquired) that takes them beyond the rest of humanity.  In athletics their star will fade when the skills do but there is something about the arts that allows them to continue to shine long after the skills have faded.  They are thrust to the pinnacle of Hollywood success as a modern day Mount Olympus elevated above mortal mankind.  They will burn hot, bright and powerfully for a short time before flaming out  in a media clamoring crash to earth.  They will seduce us while themselves being seduced.  The same winged chariot (the mainstream media) that carried them to heights beyond anything mere mortals can imagine will eventually hurl them into the ground with the same fervor.

When their star crashes back down to earth it’s down in a humiliating manner to seemingly punish them for their rise to into the heavens.  Memorializing will lead to merchandising and become a boon for the machine that made them.  Excuses will be made for their flaws and they will be resurrected into immortality to make us forget their failures and to allow their divine parent (the entertainment industry) to continue to prosper from their part in the creation of this human hybrid.

And, just as it was the demigods of old, humanity will both mourn their loss and revel in it as well.  They are revered and resented at the same time.  When the fallen idol is one whose gift began in the church their comeuppance will be more intense, more revealing and much more viscous.  Mmourned in one breath and vilified in another. Dirty laundry will not only be aired out it will exposed for all the world to see forever.  Confidences will be betrayed and spirituality will exchange itself for profitability.

Two fallen idols came to mind this weekend who both began their singing in church, both knew the Lord and both succumbed to the compromise of meteoric stardom – Elvis Presley and Whitney Houston.  For both prescription drugs will steal their looks, erase their gift and eventually play a part in their demise.  For both it came at point when their careers were all but dead (their deaths would resurrect their popularity and record sales).  And, for both it would come in a bathroom naked or with pants around their ankles as their daughters (Lisa Marie Presley for Elvis and Bobbi Kristina Brown for Whitney) tried in vain to get to the side of their loved one. Both daughters would left with the image of their parent dead on a bathroom floor etched into their memory for the rest of their lives.

There is another connection between Elvis Presley and Whitney Houston – Whitney’s mother Cissy Houston.  In 1969 and 1970 Cissy was a member of the Sweet Inspirations who performed background vocals for Elvis on his records and during his return to live performing during the initial Las Vegas tours.  Cissy once told a story about they would sing Gospel music with Elvis after rehearsals.  She said said “He was singing Gospel all the time – almost anything he did had that flavor. You can’t get away from what your roots are”.   You can’t get away from what your roots are – even in the midst of their failures and fleshly indulgences both Elvis and Whitney knew their roots and had to feel the pain of spiritual conviction as stardom pulled on those roots.  In both of her interviews – 2002 with Diane Sawyer and 2009 with Oprah Winfrey – Whitney professed her love for the Lord but admitted that she was her own worst enemy.  When Diane Sawyer asked her what her “biggest devil” was ( as in what drug was her greatest temptation) Whitney surprised her by answering “That would be me. It’s my deciding, it’s my heart, it’s what I want. And what I don’t want. Nobody makes me do anything I don’t want to do. It’s my decision. So the biggest devil is me. I’m either my best friend or my worst enemy.”

18 For I know that in me (that is, in my flesh) nothing good dwells; for to will is present with me, but how to perform what is good I do not find. 19 For the good that I will to do, I do not do; but the evil I will not to do, that I practice. 20 Now if I do what I will not to do, it is no longer I who do it, but sin that dwells in me.

In his book, Hungry for Heaven, author Steve Turner reports that Pastor Hamill, former pastor of the First Assembly of God in Memphis says that Presley visited him in the late 1950’s, when he was at the height of his rock and roll powers. and testified: “Pastor, I’m the most miserable young man you’ve ever seen.  I’ve got all the money I’ll ever spend.  I’ve millions of fans.  I’ve got friends.  But I’m doing what you taught me not to do, and I’m not doing the things you taught me to do” (Hungry for Heaven, page 20).

21 I find then a law, that evil is present with me, the one who wills to do good. 22 For I delight in the law of God according to the inward man. 23 But I see another law in my members, warring against the law of my mind, and bringing me into captivity to the law of sin which is in my members. 24 O wretched man that I am! Who will deliver me from this body of death? 25 I thank God—through Jesus Christ our Lord!  So then, with the mind I myself serve the law of God, but with the flesh the law of sin.

The word idolize means to worship as a god; broadly : to love or admire to excess.  The entertainment industry public relations machine can turn ordinary people into stars and extraordinary people into demigods that we idolize and revere.  The root word for idolize is IDOL (a representation or symbol of an object of worship; broadly : a false god ) and since the Garden of Eden and the angelic rebellion that took place on Mount Hermon the worship of idols have been a bane to humanity.  The warnings and commandments about false gods and idol worship were for our own good.  Disregarding the dangers of these false gods and idols will cost us in our relationship with Almighty God.  And, if we continue to ignore the warnings we run the risk of suffering fleshly torment and/or destruction because of our choices.

5 deliver such a one to Satan for the destruction of the flesh, that his spirit may be saved in the day of the Lord Jesus

Whether it is on the theater stage or the church platform, nothing good ever comes from idolatry.  Not for us nor for the ones being idolized.  They will always fall and disappoint us while living in the fearful torment of falling.  And, the idol makers will rebuild their shattered images and continue to reap the profit of their incarnation.  To reach the pinnacle of success these fallen idols compromised their beliefs, left the narrow road and found themselves welcomed through the wide gate of spiritual & moral compromise only to discover what the price was to get on the other side of that gate.

On February 11, 2012 Whitney Houston paid her price for entrance to the other side of the wide gate with her life.

It’s a good thing for her the Lord paid the nonrefundable price for her soul beforehand!

35 Who shall separate us from the love of Christ? Shall tribulation, or distress, or persecution, or famine, or nakedness, or peril, or sword? 36 As it is written:

“For Your sake we are killed all day long;
We are accounted as sheep for the slaughter.”

37 Yet in all these things we are more than conquerors through Him who loved us. 38 For I am persuaded that neither death nor life, nor angels nor principalities nor powers, nor things present nor things to come, 39 nor height nor depth, nor any other created thing, shall be able to separate us from the love of God which is in Christ Jesus our Lord.

Dark days of destruction for us lay ahead.  We will leave the LIGHT on!

Sharing information and inspiration from all areas. Natural to Supernatural. Media to Ministry. And, all areas in between.
View all posts by The Beacon's Glare →
This entry was posted in Christian, Media, Music, Uncategorized and tagged Cissy Houston, demigods, Elvis Presley, Hollywood, idol worship, idolatry, Mount Hermon, The Bible, the Devil, Whitney Houston. Bookmark the permalink.