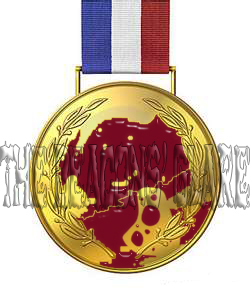 What is a badge of honor?

Definition: a medal or token signifying an awarded honor or distinction; also in figurative use.

What would be an example?  The mixed martial arts fighter felt that his cauliflower ear was a badge of honor.

For the most part, the term of a “badge of honor” is used to glorify something that has been obtained in conflict and would normally be considered a negative.  Their perspective turns a negative into a positive – at least in their mind.

Do you want to hear about a bad badge of honor?

“Wow, the enemy is really beating me up.  I must be threat for them to spend that much time pounding on me“.

“Yeah, I’ve lost everything – family, job, money, health – because of spiritual warfare but that just shows how dangerous I am to the kingdom of darkness“.

So, why is this a BAD badge of honor?

Let’s great real – if you are getting beat up in a fight it usually means you are LOSING!

The Whole Armor of God

14 Stand therefore, having girded your waist with truth, having put on the breastplate of righteousness, 15 and having shod your feet with the preparation of the gospel of peace; 16 above all, taking the shield of faith with which you will be able to quench all the fiery darts of the wicked one. 17 And take the helmet of salvation, and the sword of the Spirit, which is the word of God;

In the Armor of God every aspect of it is defensive except for the sword of the Spirit (the Word of God) therefore we should be extremely protected.    We are also given a promise even under the old covenant of protection.

Safety of Abiding in the Presence of God

91 He who dwells in the secret place of the Most High
Shall abide under the shadow of the Almighty.
2 I will say of the Lord, “He is my refuge and my fortress;
My God, in Him I will trust.”

3 Surely He shall deliver you from the snare of the fowler[a]
And from the perilous pestilence.
4 He shall cover you with His feathers,
And under His wings you shall take refuge;
His truth shall be your shield and buckler.
5 You shall not be afraid of the terror by night,
Nor of the arrow that flies by day,
6 Nor of the pestilence that walks in darkness,
Nor of the destruction that lays waste at noonday.

7 A thousand may fall at your side,
And ten thousand at your right hand;
But it shall not come near you.
8 Only with your eyes shall you look,
And see the reward of the wicked.

9 Because you have made the Lord, who is my refuge,
Even the Most High, your dwelling place,

Look at the headline for this section of scripture – Safety of Abiding in the Presence of God!

So, logically, is you are getting the spiritual snot knocked out of you, getting hurt (emotionally, spiritually, physically, etc.) and taking a pounding from the enemy SOMETHING MUST BE WRONG!

Where is the victory and witness or glory for the Lord in that?

Since there is no condemnation for those who are in right relationship with the Lord and walking according to the Spirit and not the flesh let’s look at what is really happening here.

Instead of wearing your bad badge of honor ask the Holy Spirit to show you where the opening is in your defenses.  Ask where and how the enemy is getting past the God-given defenses the Word gives us.  In martial arts we learn and teach that if your opponent is hitting you at will it means either you are dropping your guard or giving away your next move.  Your opponent will determine your next move, be ahead of you and deliver a blow.

Getting beat up and worn down in the battle while seemingly glorious is not.  Will you get hit in a battle?  Of course you will.  Look at the opening of the section on the Armor of God:

Being STRONG in the Lord and in HIS POWER we can stand against the enemy in this wrestling match – in the Greek: full on, physical, nose to nose Greco-Roman wrestling – and in doing so will STAND!

So, if you are wearing a bad badge of honor take it off, throw it out and find out where the opening is in the supernatural defenses and victory given to us by the Lord through His Holy Spirit!  He bloodied so that we didn’t have to be!!

To help you find it and become victorious we are leaving the LIGHT on!

Sharing information and inspiration from all areas. Natural to Supernatural. Media to Ministry. And, all areas in between.
View all posts by The Beacon's Glare →
This entry was posted in Christian, End Times, Paranormal, Superantural, Uncategorized and tagged badge of honor, Spiritual Warfare, The Cross, victory in JESUS, wrestle not against flesh and blood. Bookmark the permalink.