If you were present at the S-E-E Conference last year in Groton, CT you heard me teach on the DNA.  If you were not there or have not seen the video  go here (@ 16:58 the explanation of the design of the DNA begins).  Basically the concept is this – our DNA acts as a transmitter and receiver of information as well as acts as a recorder (a Black Box if you will) of all of our experiences, emotions and feelings.

Russian scientists and researchers  Dr. Pjotr Garajajev, Peter Gariaev and Vladimir Poponin discovered that DNA acts as a transmitter and receiver of information almost like a computer chip.  This research was led by Dr. Pjotr Garjajev, member of the Russian Academy of Sciences as well as the Academy of Sciences in New York.  According to Garjajev’s studies, DNA is not only the transmitter and receiver of electromagnetic radiation (in the form of energy), but it also absorbs information contained in the radiation and interprets it further. Thus, DNA is an extremely complex interactive optical biochip.

In the book Vernetzte Intelligenz (Cross-Linked Intelligence) they wrote the following on this subject:

“For example, today we speak almost matter-of-factly about the “genetic code,” that is, about a systematic codification of information. However, genetics to date has gotten stuck at this point, and has relied exclusively on chemistry to finish the work, without even once calling in language experts.

“In Moscow, things are different. There, the genetic code was…additionally subjected to thorough examination by linguists. (Linguistics is the science of the structure and formation of languages). When studying a language, people investigate regularities such as syntax (rules for building words from letters), semantics (the study of the content meaning of words), and rules of grammar.

“When this scientific knowledge is applied to the genetic code, it can be seen that this code follows the same rules as our human languages.

“It should be noted: not the rules of a particular language (in this case, for example, the Russian language), but rather rules at a fundamental level where common features reside among all existing languages of mankind. Thus, the structure of the genetic code can be connected with every existing human language.

“Scientists have been seeking the ancestral human language for centuries – Piotr Garjajev and his colleagues may have found it.” 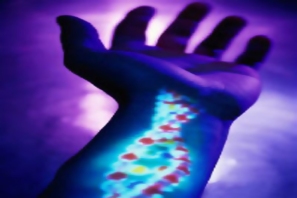 When you were created your DNA coding and the frequency (i.e. song) it transmits is specific to you.  This is called a DNA signature.  If we add an RFID chip (Radio Frequency Identification) to the mix your specific DNA can act as a GPS device to find you anywhere in the world at any time.  This technology is being touted for use in finding missing persons, soldiers missing in action, etc.  For that to work that would mean we would all have to have our DNA signature registered in a worldwide database. Are you seeing a prophecy being fulfilled here – the Mark of the Beast and the computer known as the Beast working together?

In a recent article is was revealed that lock of Ludwig von Beethoven’s hair was analyzed and his DNA encoded into musical notes.  Those notes were translated and they created a “song” from Beethoven’s DNA.  As evidenced by this You Tube video, the song is a sad one.

Beethoven experienced a lot of pain (physical and emotional) in life that had been, as Dr. Pjotr Garjajev deduced, recorded into his DNA.

That got me to thinking; if your DNA was encoded and put to music what song would it play? Would it be a sad song like Beethoven’s was or would those of us who call ourselves Believers in the Yeshua/Jesus sing a different song?

Make it a good one and give it the right inspiration!

Let All Things Praise the Lord

Praise God in His sanctuary;
Praise Him in His mighty firmament!

2 Praise Him for His mighty acts;
Praise Him according to His excellent greatness!

6 Let everything that has breath praise the Lord.

And, to keep the darkness from interfering with the composition of your “song”, we are leaving the LIGHT on!

Sharing information and inspiration from all areas. Natural to Supernatural. Media to Ministry. And, all areas in between.
View all posts by The Beacon's Glare →
This entry was posted in Christian, End Times, Music, Prophecy, Superantural, Uncategorized and tagged Beethoven, DNA, Jesus, Praise, spirituality, The Bible, The Lord. Bookmark the permalink.